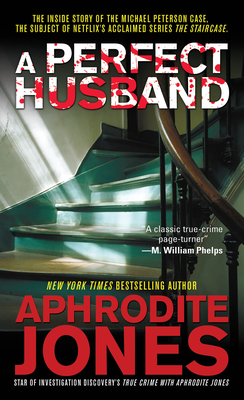 “Aphrodite Jones is one of the chief practitioners of the true crime genre.”
—Baltimore Sun

Updated with a fascinating analysis of the series The Staircase.

Michael Peterson was a decorated war veteran and bestselling novelist, his wife Kathleen a high-powered executive and devoted mother. They seemed to be the perfect couple—until the tragic night Michael found Kathleen at the bottom of the stairs in a pool of blood. He claimed her death was an accident. The prosecution put him behind bars. Then in a stunning reversal, a judge gave him another chance to stand trial. Aphrodite Jones draws on exclusive interviews and disturbing new evidence to update this classic real-life thriller of marriage, manipulation, and murder.

“Prepare yourself for a journey into a meticulous criminal mind."
—Corey Mitchell, author of Savage Son

Aphrodite Jones is a bestselling true crime author and journalist who uses her reporter’s hunch to investigate and write about murder. Through her eyes, Jones brings readers inside murder cases as she explores dark motives and conveys the emotional truths hiding behind the tragedy. Over the past two decades, Jones has written a string of best-selling true crime books and has provided TV commentary and expert insights into the psychological profiles of both criminals and victims.

Jones knows the crime world first hand. She’s known as a TV persona who doesn’t sugar-coat important issues for viewers. She has a penchant for “telling it like it is” and in her 25 years of crime reporting, Jones has been asked to investigate and comment on everything from the 9/11 Terrorist Attacks to the trials of O.J. Simpson. She has appeared as a crime expert on CNN, MSNBC, FOX News, HLN, Court TV, TLC, Entertainment Tonight, Inside Edition, Extra!, Anderson Cooper Live, Forensic Files, E! News, The New Detectives, American Justice, Deadline Crime, The Jury Speaks, CBS This Morning, The Today Show, Dateline NBC, and Dr. Oz. Her website is www.aphroditejones.com.
Loading...
or
Not Currently Available for Direct Purchase