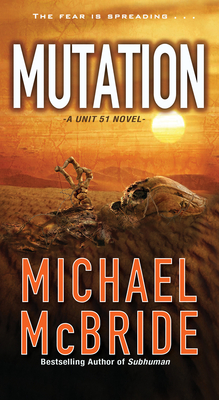 “McBride writes with the perfect mixture of suspense and horror that keeps the reader on edge.”
—Examiner

IT LIVES.
In a research hangar in Virginia, a Unit 51 team studies an ancient but long-dormant virus that can transform human physiology—and turn it into something else. . .

IT SPREADS.
In Mexico and Turkey, the men and women of Unit 51 race to uncover a global link between the mutations: a connection as ancient as the oldest tombs on earth—and as alien and unknowable as the universe itself. But time is running out. The infected are growing in number. And the nightmare is going viral.

“This novel is for everyone who’s still a little scared of the dark . . . a very good sci-fi/thriller.”
—The Oklahoman on Subhuman

Michael McBride was born in Colorado and still resides in the shadow of the Rocky Mountains. He hates the snow, but loves the Avalanche. He works with medical radiation, yet somehow managed to produce five children, none of whom, miraculously, have tails, third eyes, or other random mutations. He writes fiction that runs the gamut from thriller (Remains) to horror to science fiction (Vector Borne, Snowblind) . . . and loves every minute of it. He is a two-time winner of the DarkFuse Readers' Choice Award. You can visit him at author.michaelmcbride.net.
or support indie stores by buying on
Copyright © 2020 American Booksellers Association