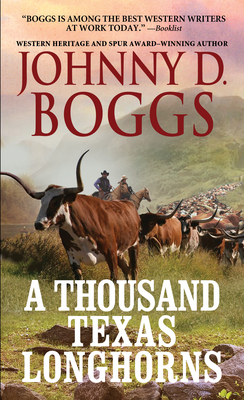 Multiple award-winning author Johnny D. Boggs, one of the most respected and popular writers of Western fiction, brings to life the harsh reality of cattle drives in a powerful, trailblazing adventure inspired by the harrowing true story of the1866 cattle drive from Texas to Montana--and the legendary man who dared the impossible...

The Civil War is over. The future of the American West is up for grabs. Any man crazy enough to lead a herd of Texas longhorns to the north stands to make a fortune--and make history. That man would be Nelson Story. A bold entrepreneur and miner, he knows a golden opportunity when he sees one. But it won't be easy. Cowboys and bandits have guns, farmers have sick livestock, and the Army's have their own reasons to stop the drive. Even worse, Story's top hand is an ornery Confederate veteran who used to be his enemy. But all that is nothing compared to the punishing weather, the deadly stampedes--and the bloodthirsty wrath of the Sioux...

This is the incredible saga of a man named Story. A true legend of the Old West. And the ever-beating heart of the American Dream.

Praise For A Thousand Texas Longhorns…

"Boggs' gift for memorable storytelling rises to its highest level in Return to Red River...bringing the reader to a dramatic, page-turning cattle drive, leading to an unforgettable ending. All this is set against Boggs' impeccable research of place and time."
—True West on Return to Red River

“Moves with impeccable pacing and crisp realism, from its stark beginning to the fireball climax.”
—Roundup Magazine on Return to Red River

“Johnny D. Boggs' strongest, purest Western to date. Boggs excels at describing the uniquely beautiful, if somewhat brutal, terrain of the Southwest. The Killing Shot is a Western in the classic sense, full of living, breathing characters and boasting a story that never sags.”
—Tucson Weekly

"Boggs' historical asides are aided by a narrative style that drive the story along full gallop."
—True West on The Despoilers

"Boggs has once more written a humdinger of a book with wonderful characters, even the villains. The Despoilers tears at one's heart, which is what really good fiction should do."
—Roundup Magazine

"Boggs is among the best Western writers at work today. He writes with depth, flavor, and color, all of which are evident in this right-of-passage tale...Boggs tells the familiar story with authenticity and power."
—Booklist on The Lonesome Chisholm Trail

Booklist has called Johnny D. Boggs “among the best western writers at work today.” He won the prestigious Spur Award from Western Writers of America in 2006 for his novel Camp Ford, and in 2002 for his short story “A Piano at Dead Man’s Crossing.” In 2012, West Texas Kill was awarded the Spur Award for Best Original Paperback. His novels Ten and Me and The Hart Brand were Spur finalists in 2000 and 2007, and he won the Western Heritage Wrangler Award in 2004 for his novel Spark on the Prairie. He was also awarded True West Magazine’s Best of the West Award “Best Living Fiction Writer,” 2008. He lives in Santa Fe, New Mexico, with his wife, Lisa Smith; son, Jack Smith Boggs; and basset hound, June.
Loading...
or support indie stores by buying on