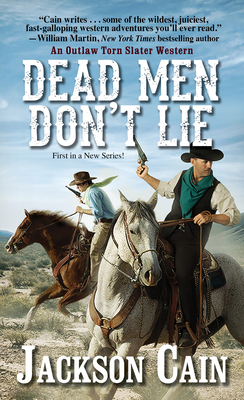 Known just as much for his highly realistic, impeccably researched settings and authentic characters as for his action-packed plots, Jackson Cain kicks off a new series featuring notorious outlaw Torn Slater. In this first adventure, he blazes through the lawless wilds of 19th Century Arizona Territory and into the brutal violence of Mexico under the savage dictatorship of Porfirio Diaz.

Wanted in thirteen states. Locked up for two years in a Mexican prison. Released into the wilds of the American West with a twenty-thousand-dollar bounty on his head. The outlaw Torn Slater doesn't just live outside the law, he takes it into his own hands--and makes it cry for mercy...

After robbing some banks, Slater knows he should lay low. But when a beautiful widow asks for his help, he can't say no. Her reckless son has gone looking for trouble in Mexico--and found it in a woman called "La Senorita." This power-mad femme fatale combines the torture methods of the Spanish Inquisition with the heart-ripping rituals of the Aztecs to get whatever she wants. And she wants the widow's son. Slater would be lying if he said taking down "La Senorita" would be easy. But dead men don't lie...

Jackson Cain is the pseudonym for Robert Gleason, the author of nearly twenty books and an Executive Editor at Macmillan Publishers. He is a highly regarded expert on nuclear terrorism and has spoken on the subject at Harvard University, on PBS, NPR, Coast to Coast AM, the Sean Hannity and Lou Dobbs TV shows, and on a History Channel two-hour special. An advocate of prison literacy who has worked with inmates in over 60 prisons, he has also edited and published writing by a number of inmates and ex-offenders. Originally from Indiana, he now lives in New York and can be found online at RobertGleasonBooks.com.
Loading...
or support indie stores by buying on