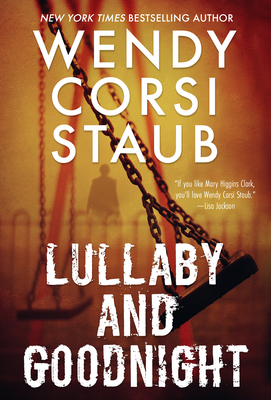 New York Times bestselling author Wendy Corsi Staub’s LULLABY AND GOODNIGHT is beautifully repackaged and reissued in Pinnacle for those who may have missed it the first time around!


HUSH LITTLE BABY, DON’T YOU CRY…
At thirty-nine, Peyton Somerset has an enviable life, with a thriving advertising career and a beautiful Manhattan apartment. And now she’s going to have the one thing she wants most—a baby. Peyton’s biological clock went off just as her fiancé took off, leaving her at the altar. So Peyton’s going it alone. Already, she’s making plans for the little one inside her . . . buying the layette, daydreaming, and worrying over the littlest things. That’s only natural. All mothers do. But Peyton has reason to worry. In fact, she has every reason to be terrified…

MAMA WON’T BE SINGING ANY LULLABIES
As the months pass, Peyton can’t help feeling that something is terribly wrong. She’s certain that someone has been in her apartment, that she’s being followed, that someone is watching her. Maybe it’s just hormonal paranoia that makes her distrust everyone around her. Or maybe her maternal instincts are dead on. Maybe there’s someone close who doesn’t think she should give birth at all. Someone who would do anything to have a baby. Anything…

Wendy Corsi Staub is the New York Times bestselling and award-winning author of more than eighty novels, many of which have also appeared on the USA Today, Amazon, Barnes & Noble, and Bookscan bestseller lists. A two-time finalist for the prestigious Mary Higgins Clark Award, she's won the 2008 RT Award for Career Achievement in Suspense, the 2007 RWA-NYC Golden Apple Award for Lifetime Achievement, an RWA Rita® award, and five WLA Washington Irving Prizes for Fiction. Readers can visit her Website at WendyCorsiStaub.com.
Loading...
or support indie stores by buying on