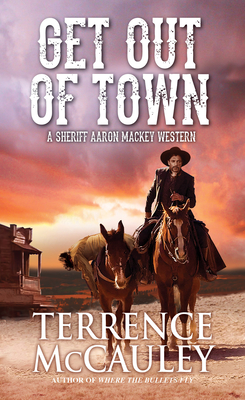 Dover Station, Montana, is no place for a lawman. A sheriff’s badge ain’t worth a nickel here—unless you’ve got the bullets to back it up . . .

When he signed up to be sheriff of this dirty little boomtown, Aaron Mackey knew he was asking for trouble. Once, when Mackey was the U.S. marshal for the whole Montana Territory, he swore no job could get any harder. But that was before he took down a few of the bank-robbing Hancock—and incurred the wrath of the gang’s maniacal matriarch, Mad Nellie Hancock.

And that was before every avenging outlaw and hired henchmen came crawling out of the woodwork to kill him—in the meanest, bloodiest showdown the town had ever seen . . .

Aaron Mackey knows you can’t fight city hall. But you can flush out every kill-crazy outlaw,  greedy grifter, and boomtown rat—then exterminate with extreme prejudice . . .

“McCauley’s more than a fair hand at Westerns . . . with  nonstop action.”
—Roundup Magazine on Where the Bullets Fly

“Comes out guns blazing from the very first page and doesn't let up until the action-packed finale . . . a real page-turner.”
—True West

“A captivating western . . . the setting is harsh and even the violence is gratifying.”
—Booklist, STARRED review on Dark Territory

Terrence P. McCauley is an award-winning writer of crime fiction, thrillers, historical fiction and Westerns. His Western fiction debut, Where the Bullets Fly, received a Western Fictioneers Peacemaker Award and was named Best New Western Paperback of the Year by True West magazine. His short stories have been featured in Thuglit, Spinetingler Magazine, Shotgun Honey, Big Pulp, and other publications. A Spur Award and ITW Award nominee, he is a recipient of the Silver Medal for Historical Fiction from the Military Writers Society of America. He is a member of the New York City chapter of the Mystery Writers of America, the International Thriller Writers, the International Crime Writers Association, and the Montana Historical Society. A proud native of the Bronx, New York, he can be found online on Facebook, Twitter or at TerrencePMcCauley.com.

“Fans of crime fiction and thrillers know Terrence McCauley as a first-rate storyteller who can handle action scenes while capturing the mood of New York City in the 1930s and today. Turns out, McCauley’s more than a fair hand at Westerns too…Imagine a spaghetti Western with flawed characters and nonstop action. Or Rooster Cogburn, without the eyepatch and a whole lot meaner.”
—Roundup Magazine on Where the Bullets Fly
or support indie stores by buying on
Copyright © 2020 American Booksellers Association