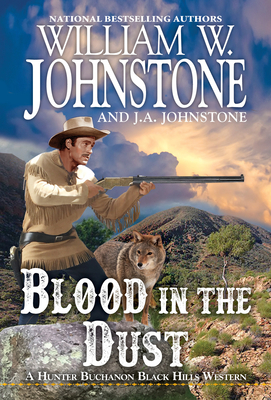 Blood in the Dust (A Hunter Buchanon Black Hills Western #2)

The greatest Western writers of the 21st Century continue the adventures of Hunter Buchanon, a towering mountain of a man who made his name as a Rebel tracker in the Civil War. Now he and his coyote sidekick Bobby Lee are trying to forge a new, peaceful life in the Black Hills, Dakota. But they'll have to fight to the death to keep it...

THERE'S COYOTES IN THEM THERE HILLS.

Ex-Rebel tracker Hunter Buchanon is down on his luck. He lost his family's ranch in a fire. He lost his gold to a thief. And he just might lose his fiancée--a beautiful saloon girl named Annabelle--to a stinking-rich rival. But Hunter's not ready to give up just yet. He's got a temporary sheriff's badge, a long-range plan to rebuild his ranch, and his loyal coyote Bobby Lee by his side to make things right. Too bad it all goes wrong--when Annabelle gets kidnapped...

The mayhem begins with a stagecoach robbery in the Black Hills town of Tigerville. It won't end until Sheriff Hunter Buchanon gets back his girl and his gold--on a long, dusty trail of bloodsoaked vengeance...