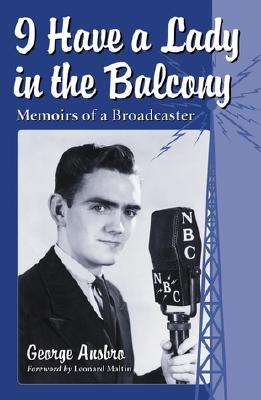 I Have a Lady in the Balcony (Hardcover)

Memoirs of a Broadcaster in Radio and Television

On Friday, May 18, 1934, radio columns in the New York press announced that Bert Parks of CBS would be "relinquishing his status as N.Y.s youngest Network Staff Announcer to the newly appointed George Ansbro on the NBC Announcing Staff." Ansbros successful audition led to a career that included work on Young Widder Brown, Manhattan Maharajah and Dr. I.Q., the television show from which the books title line is taken. Fifty-five years after his broadcast beginning, he was hailed as a pioneer who in terms of service held the honor of being the oldest employee of any network. From his role as an NBC page in 1931 to his career as a network announcer, Ansbro recalls an era that includes a whos who of early radio and Hollywood stars, and a transition from what was known as the Blue Network and its beginnings at Rockefeller Center to the massive radio and television organization now known as ABC. Along with such names as Howard Cosell, Bob Hope, and Mary Pickford, Ansbro helped shape the modern entertainment world.