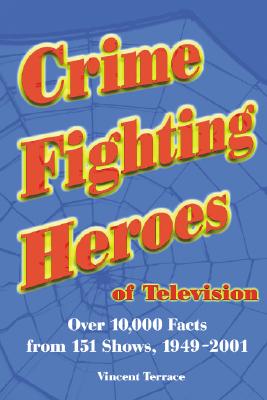 Superheroes and characters who fight crime by extraordinary means have populated the television airwaves from the beginning. This broad-ranging reference contains a trove of information on shows featuring such characters as Superman and Black Scorpion to programs like The A-Team and Knight Rider. Regular police and detective shows have been excluded. Alphabetical entries on 125 network, cable and syndicated series broadcast from 1949 to 2001, plus 26 pilot films, deliver information about story premises, characters, and myriad elements that add flavor and interest to the shows, as well as cast listings and broadcast data. A handy index of performers is included as well as appendices listing the crime fighting superheroes and machines that appear in the programs.

Vincent Terrace has worked as a researcher for ABC television and is the television historian for BPOLIN Productions (an independent film and television producing company for which he has created a projected television series called "April's Dream"). He has written more than 30 books, many about television and radio.
or
Not Currently Available for Direct Purchase
Copyright © 2020 American Booksellers Association