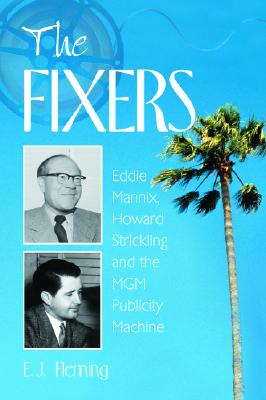 Eddie Mannix and Howard Strickling are virtually unknown outside of Hollywood and little-remembered even there, but as General Manager and Head of Publicity for Metro-Goldwyn-Mayer Studios, they lorded over all the stars in Hollywood's golden age from the 1920s through the 1940s--including legends like Garbo, Dietrich, Gable and Garland. When MGM stars found themselves in trouble, it was Eddie and Howard who took care of them--solved their problems, hid their crimes, and kept their secrets. They were "the Fixers." At a time when image meant everything and the stars were worth millions to the studios that owned them, Mannix and Strickling were the most important men at MGM. Through a complex web of contacts in every arena, from reporters and doctors to corrupt police and district attorneys, they covered up some of the most notorious crimes and scandals in Hollywood history, keeping stars out of jail and, more importantly, their names out of the papers. They handled problems as diverse as the murder of Paul Bern (husband of MGM's biggest star, Jean Harlow), the studio-directed drug addictions of Judy Garland, the murder of Ted Healy (creator of The Three Stooges) at the hands of Wallace Beery, and arranging for an unmarried Loretta Young to adopt her own child--a child fathered by a married Clark Gable. Through exhaustive research and interviews with contemporaries, this is the never-before-told story of Eddie Mannix and Howard Strickling. The dual biography describes how a mob-related New Jersey laborer and the quiet son of a grocer became the most powerful men at the biggest studio in the world.

E.J. Fleming has been researching Hollywood for decades and has penned biographies of Carole Landis and Wallace Reid, among other books. He lives in the country in Connecticut.
or support indie stores by buying on
(This book is on backorder)
Copyright © 2020 American Booksellers Association