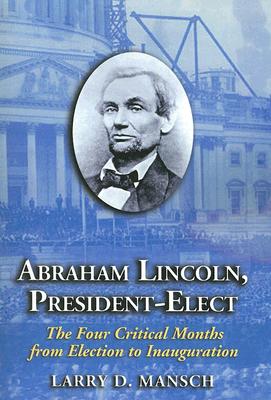 The Four Critical Months from Election to Inauguration

Immediately after Abraham Lincoln was elected President of the United States of America, the nation began to experience extreme turmoil. From his election in November 1860 until his inauguration five months later, Lincoln was pushed, pulled, blamed and praised by all people from all sides as the country began its inevitable slide toward war. Southerners refused to see him as anything but a "Black Republican," an abolitionist poorly disguised as a moderate who was committed only to destroying their beloved slave system, and with it, their entire way of life. Northerners, meanwhile, pleaded with Lincoln to speak out and reassure the country that his election, and his policies, brought not separation, but harmony. This engaging work utilizes, in addition to better known works, sources sometimes overlooked or under appreciated: newspaper accounts from across America (particularly from the cities Lincoln passed through on his journey to Washington), journals and diaries of his contemporaries, and correspondence. Lincoln's speeches also appear here as they did in newspapers in 1860 and 1861; crowd reactions and Lincoln's occasional banter with individuals who called out to him are faithfully reproduced, as well.

Attorney and history teacher Larry D. Mansch is the legal director for the Montana Innocence Project and has written four previous books. He lives in Missoula, Montana.
or
Not Currently Available for Direct Purchase
Copyright © 2020 American Booksellers Association