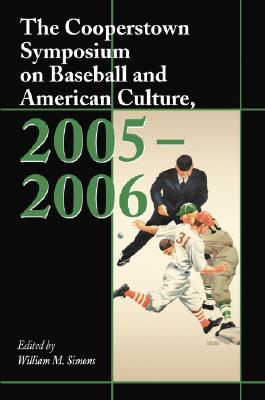 The Cooperstown Symposium on Baseball and American Culture, 2005-2006

This anthology gathers selected papers from the 2006 and 2007 meetings of the Cooperstown Symposium on Baseball and American Culture, the long-running academic conference held annually at the National Baseball Hall of Fame. Essays in the first of the volume's six sections, The African American Experience, examine Negro League playing styles as cultural expression, media coverage of Curt Flood's battle against MLB, and autobiographical accounts by Flood and Jackie Robinson that recall slave-narrative tradition. In The Women's Game the legacy of Title IX is explored, along with gender constructions at the time of the All-American Girls Professional Baseball League. Teams and their towns are the focus of Baseball and Community; essays deal with Dodgertown and Vero Beach, baseball and advertising in Brooklyn, and the baseball identity of a mining town in New Mexico. In Baseball Ideology the game's films, wartime rhetoric, and the approaches to its ethnic history are investigated. Essays in Biography: Baseball Lives relate the true stories of a Depression-era felon treated to a World Series game at Wrigley and the post-Katrina struggles of pitching great Mel Parnell. Finally, in The Business of Baseball, essayists gauge the effects of the recent steroids scandal, three decades of free agency, and MLB's new global perspective.