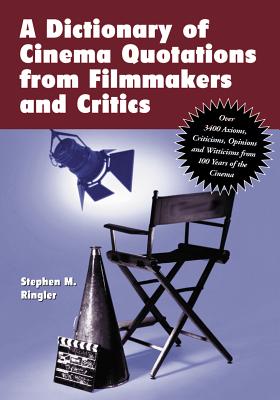 A Dictionary of Cinema Quotations from Filmmakers and Critics

Over 3400 Axioms, Criticisms, Opinions and Witticisms from 100 Years of the Cinema

"The cinema isn't a slice of life, it's a slice of cake"--Alfred Hitchcock. "If you make a popular movie, you start to think where have I failed?"--Woody Allen. "A film is the world in an hour and a half"--Jean-Luc Godard. "I think you have to be slightly psychopathic to make movies"--David Cronenberg. This compendium contains more than 3,400 quotations from filmmakers and critics discussing their craft. About 1,850 film people are included--Bu uel, Capra, Chaplin, Disney, Fellini, Fitzgerald, Griffith, Kael, Kurasawa, Path , Sarris, Schwarzenegger, Spielberg, Waters and Welles among them. The quotations are arranged under 31 topics such as acting, animation, audience, budget, casting, critics, costume design, directing, locations, reviews, screenwriting, special effects and stardom. Indexing by filmmakers (or critics), by film titles and by narrow subjects provides a rich array of points of access.

Stephen M. Ringler is a producer, writer, and researcher in the IMAX-style film industry. He lives in Santa Barbara, California.
Loading...
or
Not Currently Available for Direct Purchase