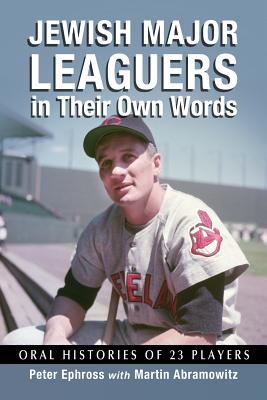 Jewish Major Leaguers in Their Own Words

Between 1870 and 2010, 165 Jewish Americans played Major League Baseball. This work presents oral histories featuring 23 of them. From Bob Berman, a catcher for the Washington Senators in 1918, to Adam Greenberg, an outfielder for the Chicago Cubs in 2005, the players discuss their careers and consider how their Jewish heritage affected them. Legends like Hank Greenberg and Al Rosen as well as lesser-known players reflect on the issue of whether to play on high holidays, responses to anti-Semitism on and off the field, bonds formed with black teammates also facing prejudice, and personal and Jewish pride in their accomplishments. Together, these oral histories paint a vivid portrait of what it was like to be a Jewish Major Leaguer.

Peter Ephross was a longtime editor for the Jewish Telegraphic Agency news service and has published in Publishers Weekly, the Village Voice, and Forward. He lives in Brooklyn, New York. Martin Abramowitz is the president of Jewish Major Leaguers, Inc., which documents American Jews in baseball and sponsored many of the interviews in this book.
Loading...
or
Not Currently Available for Direct Purchase