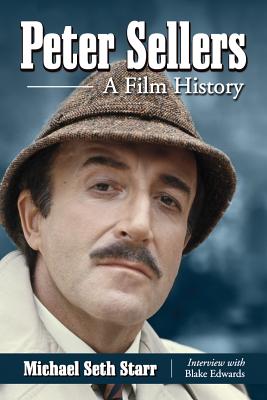 Peter Sellers left behind a rich legacy of film work, some of which is only belatedly recognized for its genius. Especially notable were his numerous crazy accents. Though most widely known as the slapstick Inspector Clouseau of the Pink Panther series (from 1964 on), he is recalled by many for such earlier efforts as his triple role in The Mouse That Roared (1959) and his masterly breakthrough to the mainstream American market in I'm All Right, Jack (1959). This book analyzes each Sellers film from 1951, not least his Oscar-nominated triple-role stint in Dr. Strangelove. He also turned in a brilliant performance as the slyly sinister Clare Quilty in Lolita. Interesting anecdotes, behind-the-scenes information, a detailed plot summary, contemporary criticism and the author's own analysis are given for each film. Complete filmographies and index.

Michael Seth Starr has covered television as a reporter and columnist at The New York Post since 1995. The author of several biographies of film and music stars, he has made frequent appearances on television including The Today Show, Good Morning America, The Early Show, Late Late Show with Craig Ferguson, Entertainment Tonight and Tavis Smiley.
Loading...
or
Not Currently Available for Direct Purchase