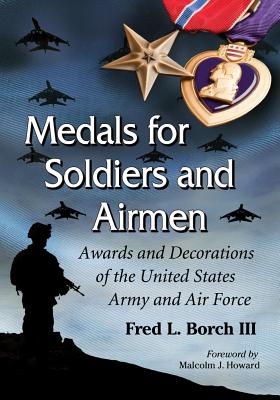 Medals for Soldiers and Airmen (Paperback)

Awards and Decorations of the United States Army and Air Force

This is the first and only comprehensive history of all decorations and medals that may be awarded to men and women serving in the United States Army and Air Force. The background and design of each medal are examined, as well as award criteria governing each decoration. The book first looks at the Army and Air Force Medals of Honor before continuing with other awards, including the Distinguished Service Cross, Distinguished Service Medal, Air Force Cross, Silver Star, Legion of Merit, Bronze Star Medal and Purple Heart. The histories of more common medals like the Air Medal, Meritorious Service Medal, Army and Air Force Commendation Medals and Army and Air Force Achievement Medals are also included. Photographs of each medal (obverse and reverse) accompany the text, along with selected photographs of recipients and the citations for their awards.

Fred L. Borch III served 25 years as an Army lawyer. A professionally trained historian, he now serves as the Regimental Historian and Archivist for the Army Judge Advocate General's Corps. He lives in Charlottesville, Virginia.
or
Not Currently Available for Direct Purchase
Copyright © 2020 American Booksellers Association