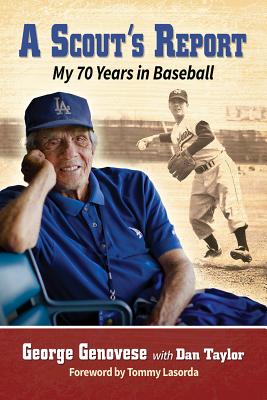 My 70 Years in Baseball

Many in baseball consider the scout to be the most important figure in any organization: It is the scout's work in the high school and college bleachers that unearths future legends. Few have achieved more--and in such grand style--than George Genovese. In a game that values numbers, Genovese's are staggering. No other scout has been responsible for more players in a single lineup, more home runs by players signed or more All-Star and World Series highlights than Genovese. Genovese's eye for talent is unmatched, his advocacy for the players he discovers is unrivaled, and the investment he makes toward their success is a difference maker. This autobiography is the story of his seven decades in baseball as a player, manager and scout.

The late George Genovese was regarded by peers as the greatest baseball scout of all time. His playing career spanned 16 seasons and included a stint in the major leagues. Following 11 seasons as a minor-league manager, Mr. Genovese developed a level of proficiency many believe will never be duplicated. His profession's highest honor, the lifetime achievement award bestowed by the Professional Baseball Scouts Foundation, bears his name. He lived in North Hollywood, California. Dan Taylor is a former award-winning television sportscaster. The origins of his announcing work stretch back to summer involvement with minor-league baseball. He lives in Fresno, California.
Loading...
or
Not Currently Available for Direct Purchase