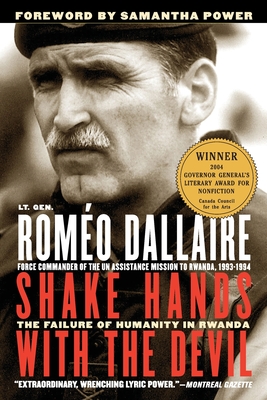 Shake Hands with the Devil

For the first time in the United States comes the tragic and profoundly important story of the legendary Canadian general who "watched as the devil took control of paradise on earth and fed on the blood of the people we were supposed to protect."

When Romeo Dallaire was called on to serve as force commander of the UN Assistance Mission for Rwanda, he believed that his assignment was to help two warring parties achieve the peace they both wanted. Instead, he was exposed to the most barbarous and chaotic display of civil war and genocide in the past decade, observing in just one hundred days the killings of more than eight hundred thousand Rwandans. With only a few troops, his own ingenuity and courage to direct his efforts, Dallaire rescued thousands, but his call for more support from the world body fell on deaf ears. In Shake Hands with the Devil, General Dallaire recreates the awful history the world community chose to ignore. He also chronicles his own progression from confident Cold Warrior to devastated UN commander, and finally to retired general struggling painfully, and publicly, to overcome posttraumatic stress disorder -- the highest-ranking officer ever to share such experiences with readers.

Praise For Shake Hands with the Devil: The Failure of Humanity in Rwanda…

Toronto Globe and Mail
“Almost certainly the most important book published in Canada this year.” Quill & Quire
“[Shake Hands with the Devil] is an affidavit for an indictment—an indictment of the murderers, the hamstrung, bureaucratized UN, and the self-absorbed developed world. ... Roméo Dallaire emerges as our post–Cold War hero.” Candy Crowley, CNN Chief Political Correspondent“It’s stark and it’s horrible, but it’s fascinating and very moving.”

Lt. Gen. RomÃ©Dallaire joined the Canadian Army in 1964. After returning from Rwanda, he was promoted to three-star general and served in various senior positions including assistant deputy minister in the Canadian Ministry of Defence. He is the highest-ranking military figure ever stricken with post-traumatic stress disorder, and continues to advise Canadian Forces and Veterans Affairs in matters related to PTSD. In January 2002 he received the inaugural Aegis Award for Genocide Prevention in London.
Loading...
or support indie stores by buying on