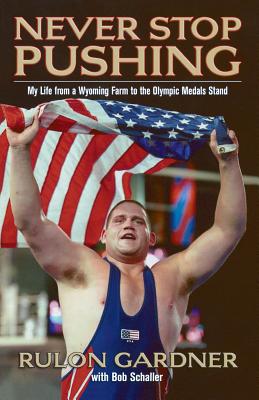 My Life from a Wyoming Farm to the Olympic Medals Stand

Never Stop Pushing is a motivational autobiography by Olympic Greco-Roman champion wrestler Rulon Gardner (Gold Medal, 2000; Bronze Medal, 2004). This inspiring memoir comes from one of the world's most remarkable athletes who achieved arguably the greatest upset in individual sports history when he defeated the Russian Alexander Karelin -- three-time Olympic champ, undefeated and unscored upon for a decade before his match with Gardner -- in the 2000 Gold Medal match. Rulon Gardner tells the story of his impoverished upbringing as one of nine children in a close-knit Mormon family on a farm in Wyoming, where in performing unceasing chores he developed tremendous strength at an early age. Gardner writes about his struggles in school made arduous by learning disabilities that have challenged him his whole life. Also, after winning his Gold Medal, we read how this champion survived a snowmobile accident that marooned him outdoors for eighteen hours in high country. Rulon Gardner recovered from this and went on to defend his Gold Medal at Athens in 2004 -- yet another comeback from this athlete who was supposed to simply fade away.

Rulon Gardner grew up in a Mormon family on a Wyoming dairy farm. He is a two-time Olympic Medalist (2000-Gold, 2004-Bronze) in Greco-Roman wrestling. His 2000 Gold Medal match is called "The Miracle on the Mat." He continues to give motivational speeches for corporations and events (i.e., Roche Pharmaceuticals, Special Olympics Hall of Fame Gala, Behr Paint, USO Navy Tour, etc.) charities, and schools across the country, as well as celebrity appearances at wrestling camps throughout the country. In addition, this year he will be honored at the Gene Autry Courage Awards in March in Phoenix as an athlete who has overcome physical adversity to succeed (also honored will be Bethany Hamilton, surfer whose arm was bitten off by a shark, and Aaron Ralston, climber who cut his arm off after it was trapped by a boulder), NASPE Hall of Fame Award in Chicago and the YMCA Honors (Person of the Year) in Salt Lake City.

Rulon is also the color commentator for the Real Pro Wrestling league on Pax and Fox Sports. Asics released his signature shoe, the "Rulon." Rulon is the Spokesman for State Games of America and has become an honorary board member for the Sports for Kids Foundation. Rulon has decided to retire from Mixed Martial Arts competition, after his defeat of Yoshida in Japan on New Year's Eve.He lives in Wellsville, Utah.

Bob Schaller is the author of thirty books, including The State of the Game with Denny Crum, The First Black Quarterback with Marlin Briscoe, and The Top Stars of NASCAR. Schaller is also a contributing editor to Skating, Splash and American Hockey magazines.
Loading...
or support indie stores by buying on