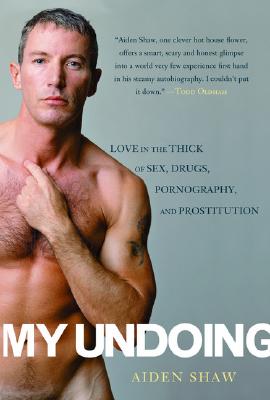 Love in the Thick of Sex, Drugs, Pornography, and Prostitution

For the first time, porn legend Aiden Shaw takes fans behind-the-scenes to the gay adult film world that made him a star. My Undoing ventures from locales such as Los Angeles, San Francisco, New York, and London, to the sets of premiere studios like Falcon, Catalina, and Studio 200. Yet, this is not the typical adult film memoir, where stars drop names and titillate readers with explicit moments. Although My Undoing shares in unsparing detail all the hot stories about the sex and drugs that fueled Aiden's life, it more profoundly follows him through a course of rocky and unfulfilling relationships. As Aiden eloquently and often humorously points out, the romantic life of an adult film superstar is sometimes lonely and lacking in love. But not love only in the form of a relationship, rather also love from within himself. The book is equally moving for his revelations about his Irish Catholic family, his Positive HIV status in the sex industry, and his recovery from a near fatal car accident that left him temporarily paralyzed.

Aiden Shaw has been a photographer and a director of pop promos, a model and an actor. He has an international reputation as a star of American-made hardcore films and is probably Britain's best known male sex star. His first novel, Brutal, published in 1996 and reprinted several times as well as translated into German and French, received wide attention in British and U.S. gay media. (“In a series of short, well-constructed, and simply written chapters the author displays quite a talent for pointed insight into the ways we communicate with friends, family, and self,” praised Lambda Book Report; Gay Scotland noted: “Aiden Shaw has until now been saluted as Britain's first hardcore porn film star. With Brutal he demonstrates his ability to write a powerful story. He has not so much stripped bare as stripped to the soul.”) His second novel, Boundaries, appeared in 1999; his third, Wasted, in 2001. He is also the author of a 1997 volume of poetry, If Language At the Same Time Shapes and Distorts Our Ideas and Emotions, How Do We Communicate Love? which Mandate praised as “a gutsy accomplishment” and about which Time Out observed “Aiden Shaw finally proves the pen is mightier than the penis.”
Founder of the alternative rock band Whatever, Shaw is currently producing an album of his songs sung by Nina Silvert, with individual tracks being remixed by such diverse individuals as Todd Oldman, Chrissie Hynde, Joseph Holtzman (publisher/editor-in-chief of Nest), and Boy George.
His Web site is aidenshaw.com.