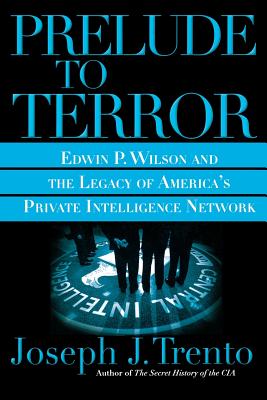 The Rogue CIA and the Legacy of America's Private Intelligence Network

After decades of writing and research about American intelligence, Joseph Trento has written the most authoritative indictment of CIA splinter groups, two generations of Bush family involvement in illegal financial networks, and the funding of the agents of terror. Prelude to Terror reveals the history of a corrupt group of spymasters -- led by Ted Shackley -- who were fired when Jimmy Carter became president, but who maintained their intelligence portfolio and used it to create a private intelligence network. After this rogue group helped engineer Carter's defeat in 1980 and allied with George H.W. Bush, these former CIA men planned and conducted what became the Iran -- Contra scandal and, through the Saudis, allied the U.S. with extreme elements in Islam. The CIA's number-one front man, Edwin P. Wilson, was framed by Shackley and his cohorts so that Wilson's operations could be taken over. For the first time the story of how CIA director George H. W. Bush was recruited into this network, and brought it into the bosom of the Saudi royal family, is told in detail, as well as how this group's manipulation of the CIA bureaucracy allowed Osama bin Laden's fundraising to thrive as al Qaeda flourished under Saudi and CIA protection.

Joseph J. Trento has had a long and brilliant career as an internationally known investigative reporter. The stories he has broken include the Justice Department perjury probe into CIA Director Richard Helms after the overthrow of the Chilean government, the case of missing CIA official John Arthur Paisley, the role of intelligence officials profiteering with CIA renegade Edwin Wilson, the first major report showing how the U.S. was secretly arming Iraq and Iran, and he reported on a secret arms deal in 2000 that resulted in the removal of the President of Peru. His books on the intelligence community include Widows and The Secret History of the CIA. He works in Washington, D.C., where he is president of the Public Education Center, an incubator for important media stories.
or support indie stores by buying on