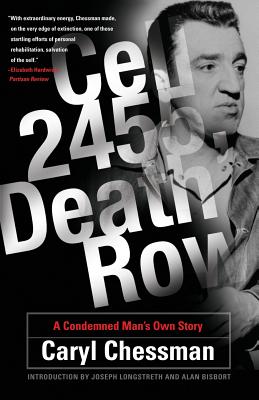 A Condemned Man's Own Story

In June 1948, 27-year-old petty criminal Caryl Chessman was sentenced in California on two counts of sexual assault, receiving two death sentences as punishment in a case that remains one of the most baffling episodes in American legal history. Maintaining his innocence of these crimes, Chessman lived in Cell 2455, a four-by-ten foot space on Death Row in San Quentin for the twelve years between his sentencing and eventual execution. He spent this time, punctuated by eight separate stays of execution, writing this memoir — a moving and pitiless account of his life in crime and the early life that produced it. Chessman's clarity of mind and ability to bring his thoughts directly to the page, even within the stifling walls of San Quentin, help make this work the most literate and authentic expose ever written by a criminal about his crimes.

Caryl Whittier Chessman (May 27, 1921 - May 2, 1960) was the man convicted for supposedly being the "Red Light Bandit," who was known for robbing women in their cars and sometimes forcing them to perform sex acts. Chessman was given the death penalty in 1948 and executed in 1960, but he claimed his innocence, and argued this convincingly, until the end. His case attracted world-wide attention and as a result he became the first cause cÃ©bre of the movement to ban capital punishment.

Joseph Longstreth, Caryl Chessman's literary agent, made this and Chessman's other books possible.
Loading...
or
Not Currently Available for Direct Purchase