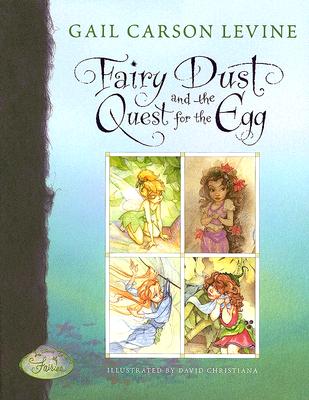 Fairy Haven is abuzz with news about its latest arrival, Prilla. It's bad enough that she has no idea what her special talent is, but some of her behavior is remarkably, well, human. Prilla is heartbroken that she does not seem to fit in. She desperately needs help from Mother Dove, the most important creature in Neverland, who created and cares for the magical egg that prevents all who live in Neverland from growing old and dying. But tragedy strikes as the island is hit by a hurricane, and the Never egg is destroyed. Mother Dove must pick three fairies to set out on a dangerous quest to repair the egg. She chooses Rani, the best water-talent fairy; Vidia, the most selfish, but fastest fast-flying-talent fairy; and, to everyone's surprise-Prilla. The three embark on a journey filled with danger, sacrifice, and adventure. The fate of Neverland-and their world as they know it-rests on their shoulders.

Gail Carson Levine (http: //gailcarsonlevine.blogspot.com) is the author of many acclaimed children's books, including the New York Times best sellers Fairy Dust and the Quest for the Egg and Fairy Haven and the Quest for the Wand; Newbery Honor Book Ella Enchanted;and Writing Magic. Gail lives with her husband, David, and their Airedale, Baxter, in a 220-year-old farmhouse in New York's Hudson Valley.

David Christiana has illustrated more than twenty picture books for children, four of which he wrote. He lives in Tucson, Arizona, and teaches illustration at the University of Arizona.
Loading...
or
Not Currently Available for Direct Purchase