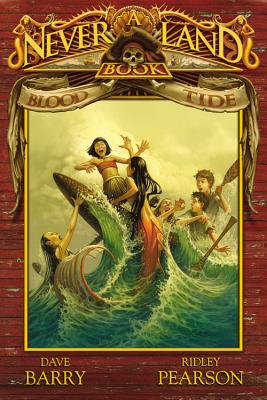 Peter and the Starcatchers Blood Tide

When an earthquake strikes Neverland Island, things quickly go very wrong. The Lost Boys' underground hideaway is flooded, forcing them to leave. Meanwhile a mysterious barrel washes ashore and falls into the hands of the pirates. When their leader, Captain Hook, finds out what's in the barrel, he hatches an evil plan.

But worst of all is the change in the mermaids. These once-peaceful friends of the natives have turned violent, using their needle-sharp teeth to attack anybody who goes into the water. When they injure some members of the native Mollusk tribe, the Mollusk leader, Fighting Prawn, feels he has no choice but to fight back.

As the warriors prepare to attack, the Lost Boys and the chief's daughters, Shining Pearl and Little Scallop, set off on a secret mission to try to make peace with the mermaids. Instead they're captured by the mermaids, and while in captivity they discover the cause of the problem – the Blood Tide, which is poisoning the lagoon and will eventually kill the mermaids. With time running out, they must try to stop the tide and save the mermaids, as well as themselves. But to do so, they must deal with Captain Hook, whose plan threatens to destroy the Mollusk village and change life on Neverland Island forever.

Dave Barry is a Pulitzer Prize - winning author of more than a dozen books, including Dave Barry's History of the Millennium (So Far); The Shepherd, the Angel, and Walter the Christmas Miracle Dog; Dave Barry's Money Secrets; Dave Barry’s Complete Guide to Guys; Dave Barry Slept Here; Big Trouble; and Dave Barry Hits Below the Beltway. Along with Ridley Pearson, he is the co-author of Peter and the Starcatchers, Peter and the Shadow Thieves, Peter and the Secret of Rundoon,Escape from the Carnivale, and Cave of the Dark Wind. Ridley Pearson is the best-selling author of eighteen novels, including The Kingdom Keepers; Killer Weekend; Cut and Run; The Body of David Hayes; The Diary of Ellen Rimbauer; Beyond Recognition; Parallel Lies; and No Witnesses. He was the first American to be awarded the Raymond Chandler/Fulbright Fellowship in Detective Fiction at Oxford University.