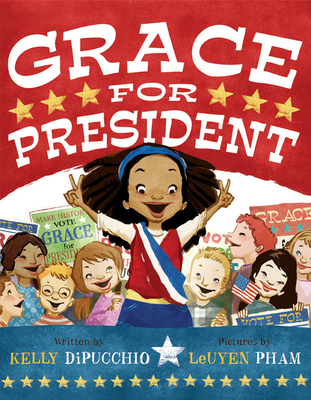 A fresh, fun, and "thought-provoking" New York Times bestseller about the American electoral college and why every vote counts from bestselling and award-winning duo Kelly DiPucchio and LeUyen Pham.
"Where are the girls?"
When Grace's teacher reveals that the United States has never had a female president, Grace decides she wants to be the nation's first and immediately jumpstarts her political career by running in her school's mock election! The race is tougher than she expected: her popular opponent declares that he's the "best man for the job" and seems to have captured the votes of all of the class's boys. But Grace is more determined than ever. Even if she can't be the best man for the job, she can certainly try to be the best person!
This timely story not only gives readers a fun introduction to the American electoral system but also teaches the value of hard work, courage, independent thought--and offers an inspiring example of how to choose our leaders.

LeUyen Pham has been illustrating picture books since leaving her job as a layout artist at Dreamworks. Her illustrations have appeared at the New York Society of Illustrators shows every year since 2000. Her first book, "Can You Do This, Old Badger?" by Eve Bunting, was chosen as an ABA Pick of the Lists and a Book-of-the-Month Club Selection, and was awarded an Oppenheim Toy Portfolio Gold Award, as well. Her second book was selected as one of "Child" magazine's Best Books of the Year. Her other books include Hanukkah, Shmanukkah, by Esme Raji Codell and Big Sister, Little Sister which she both wrote and illustrated. She lives with her husband in San Francisco. She is also illustrating FRECKLEFACE STRAWBERRY by Julianne Moore, with Bloomsbury, which is a big fall 07 title for that publisher and will raise Uyen's profile tremendously in time for the release of this book.

"DiPucchio and Pham are game gals. Explaining the electoral system to adults isn't easy, but they make it understandable to kids."—Booklist