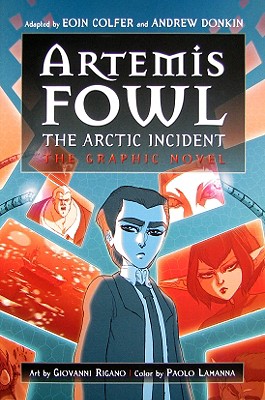 Adapted from the fantasy book of the same name, this graphic novel is beautifully illustrated and should prove an enjoyable read to fans and newbies alike. Diabolical 12-year-old genius Artemis Fowl is troubled by his father's disappearance, his mother's descent into madness, and the depletion of the family wealth. Determined to solve at least one of these problems, he hatches a brilliant plan to crack the secrets of the fairy world. Excellent use of color and shading gives the panels a tremendous sense of light with enchanting effect. Characters are expressively brought to life with fun, exaggerated style. A great addition is the inclusion of "files" from the fairy police force, with mug shots of criminals/monsters.—SLJ

Eoin Colfer is the New York Times best-selling author of the Artemis Fowl series, Half Moon Investigations; The Supernaturalist, Eoin Colfer's Legend of Spud Murphy and Legend of Captain Crow's Teeth, and The Wish List. He lives in Ireland with his wife and two children.


A talented, young Italian comic artist named Giovanni Rigano will be illustrating the book. Giovanni has illustrated many graphic novels, including the DAFFODIL series by Frederic Brremaud, several Incredibles graphic novels, and more.
Paolo Lamanna is the colorist. He also did the color work on DAFFODIL.
Loading...
or
Not Currently Available for Direct Purchase