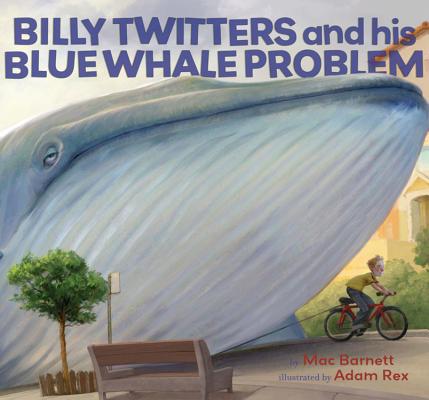 “When Billy doesn't clean his room yet again, his mom finally makes good on her threat and buys him a pet ... whale! With laugh-out-loud moments on every page, kids are sure to want to read this one again and again.”
— Shannon Grant, Books Inc., San Francisco, CA
View the List

Some interesting facts about blue whales: A blue whale is longer than thirty dogs lined up nose to tail. Its tongue weighs as much as four hundred cats. Consequently, blue whales make terrible pets...just ask Billy Twitters. When his parents threaten to teach him responsibility by giving him a whale, Billy isn't worried: 'It's not like you can just have one delivered to your house overnight.' But he's wrong. It arrives via FedUp (motto: 'Delivering Punishment Worldwide'), and it's up to Billy to take care of it!

Don't miss these other books by Mac Barnett!
Chloe and the Lion
How This Book Was Made
Rules of the House
On No! (Or How My Science Project Destroyed the World)
Oh No! Not Again! (Or How I Built a Time Machine to Save History)

Praise For Billy Twitters and His Blue Whale Problem…

"Rex's goofy illustrations blend the realistic with the fantastic...Young readers will likely enjoy the ridiculous premise, and the many whale facts worked seamlessly into the tale."—School Library Journal

"A headlong plunge into surrealism ensues when Billy Twitters' parents punish him by giving him a blue whale. The cleverness is in the idea's literal-mindedness."—The New York Times Book Review

Mac Barnett is the author of many books for children, including Extra Yarn, illustrated by Jon Klassen, a Caldecott Honor Book and winner of a Boston Globe-Horn Book Award; The Wolf, the Duck, and the Mouse, a New York Times bestseller; Sam and Dave Dig a Hole, a Caldecott Honor Book and winner of the E. B. White Read Aloud Award. Other titles include The Important Thing About Margaret Wise Brown, Chloe and the Lion, How This Book Was Made, Count the Monkeys, and Billy Twitters and His Blue Whale Problem. He is the co-author, with Jory John, of the New York Times bestselling series The Terrible Two. Mac lives in California.

Adam Rex is the multi-talented author of books for children, middle readers and young adults, as well as an accomplished illustrator. He has written such beloved picture books as School’s First Day of School (illustrated by Christian Robinson), has created both pictures and words for favorites like Are You Scared, Darth Vader?, Nothing Rhymes with Orange, and Frankenstein Makes a Sandwich; and he has illustrated books by bestselling authors like The Legend of Rock Scissors Paper by Drew Daywalt, Chloe and the Lion by Mac Barnett, and Chu’s Day by Neil Gaiman. The True Meaning of Smekday was his first novel, followed by Smek for President! and other books for middle and teen readers. He grew up in Phoenix, got a BFA from the University of Arizona, and now lives in Tucson.