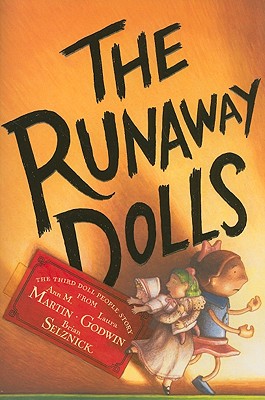 The Runaway Dolls (The Doll People #3)

“This story about a mysterious package and a dangerous adventure has been loved by everyone who has read it.”
— Rita F. Maggio, BookTowne, Manasquan, NJ
View the List

Best friends Annabelle Doll and Tiffany Funcraft have stumbled upon an unexpected visitor, a new doll named Tilly May. She's arrived in a mysterious package...but she looks so familiar. Could she be Annabelle's long-lost baby sister? It'll take a runaway adventure to find out for sure. Are the dolls ready for life on the road?

Praise For The Runaway Dolls (The Doll People #3)…

Ann M. Martin is the author of many books for young readers, including Belle Teale, A Dog's Life, and A Corner of the Universe, a 2003 Newbery Honor Book. She is also the co-author, with Paula Danziger, of P.S. Longer Letter Later and Snail Mail No More. Ms. Martin makes her home in upstate New York.

Laura Godwin, also known as Nola Buck, is the author of many popular picture books for children, including What the Baby Hears, Central Park Serenade, Barnyard Prayers, The Flower Girl, Little White Dog, and Christmas in the Manger. Born and raised in Alberta, Canada, she now lives in New York City.


Brian Selznick is the author and illustrator of the New York Times number one best-selling The Invention of Hugo Cabret, which won the 2008 Caldecott Medal and was nominated for a National Book Award. He has also illustrated many other books for children, including Frindle by Andrew Clements, Amelia and Eleanor Go for a Ride by Pam Muñoz Ryan, and The Dinosaurs of Waterhouse Hawkins by Barbara Kerley, which received a 2002 Caldecott Honor. Brian lives in Brooklyn, New York, and San Diego, California.
Loading...
or support indie stores by buying on
(This book is on backorder)