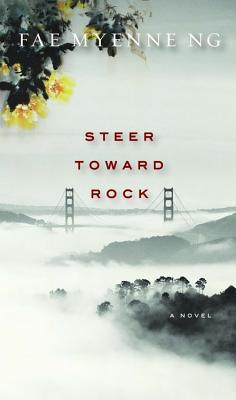 "The woman I loved wasn't in love with me; the woman I married wasn't a wife to me. Ilin Cheung was my wife on paper. In deed, she belonged to Yi-Tung Szeto. In debt, I also belonged to him. He was my father, paper too."

Steer Toward Rock, Fae Myenne Ng's heartbreaking novel of unrequited love, tells the story of the only bachelor butcher at the Universal Market in San Francisco. Jack Moon Szeto--that was the name he bought, the name he made his life by -- serves the lonely grass widows whose absentee husbands work the farmlands in the Central Valley. A man who knows that the body is the only truth, Jack attends to more than just their weekly orders of lamb or beef.

But it is the free-spirited, American-born Joice Qwan with whom Jack falls in love. A woman whose life is guided by more than simple pain, Joice hands out towels at the Underground Bathhouse and sells tickets at the Great Star Theatre; her mother cleans corpses. Joice wants romance and she wants to escape Chinatown, but Jack knows that she is his ghost of love, better chased than caught.

It is the 1960s and while the world is on the edge of an exciting future, Jack has not one grain of choice in his life. When his paper wife arrives from China he is forced to fulfill the last part of his contract and to stand before the law with the woman who is to serve as mistress to his fake father. Jack has inherited a cruel cultural legacy. A man with no claim to the past, his only hope is to make a new story for himself, one that includes both Joice and America.

Not since Bone, Fae Myenne Ng's highly praised debut novel, has a work so eloquently revealed the complex loyalties of Chinese America. Steer Toward Rock is the story of a man who chooses love over the law, illuminating a part of U.S. history few are aware of, but one that has had echoing effects for generations.

Fae Myenne Ng was born in San Francisco, and lives in Northern California and New York City. Her short stories have appeared in Harper's and other magazines, and have been widely anthologized.
Loading...
or support indie stores by buying on