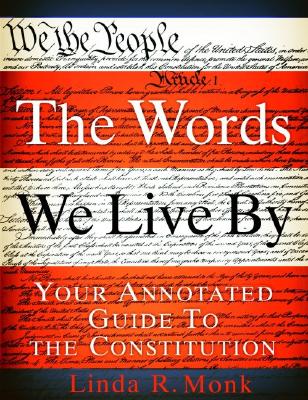 The Words We Live By

The Words We Live By takes an entertaining and informative look at America's most important historical document, now with discussions on new rulings on hot button issues such as immigration, gay marriage, gun control, and affirmative action.

In The Words We Live By, Linda Monk probes the idea that the Constitution may seem to offer cut-and-dried answers to questions regarding personal rights, but the interpretations of this hallowed document are nearly infinite. For example, in the debate over gun control, does "the right of the people to bear arms" as stated in the Second Amendment pertain to individual citizens or regulated militias? What do scholars say? Should the Internet be regulated and censored, or does this impinge on the freedom of speech as defined in the First Amendment? These and other issues vary depending on the interpretation of the Constitution.

Through entertaining and informative annotations, The Words We Live By offers a new way of looking at the Constitution. Its pages reflect a critical, respectful and appreciative look at one of history's greatest documents. The Words We Live By is filled with a rich and engaging historical perspective along with enough surprises and fascinating facts and illustrations to prove that your Constitution is a living -- and entertaining -- document.

Updated now for the first time, The Words We Live By continues to take an entertaining and informative look at America's most important historical document, now with discussions on new rulings on hot button issues such as immigration, gay marriage, and affirmative action.

Linda R. Monk, J.D., is a constitutional scholar, journalist, and nationally award-winning author. A graduate of Harvard Law School, she twice received the American Bar Association's Silver Gavel Award, its highest honor for public education about the law. Her books include The Words We Live By: Your Annotated Guide to the Constitution, Ordinary Americans: U.S. History Through the Eyes of Everyday People, and The Bill of Rights: A User's Guide. For more than twenty-five years, Ms. Monk has written commentary for newspapers nationwide-including the New York Times, Washington Post, Los Angeles Times, and Chicago Tribune, and Huffington Post.
Loading...
or
Not Currently Available for Direct Purchase