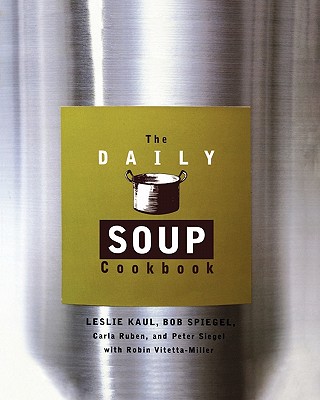 The meal-in-a-bowl brews at the Daily Soup, a Manhattan food chain, excite customer devotion. Now Leslie Kaul, the stores' executive chef, along with the owners, offer The Daily Soup Cookbook, a collection of 200 favorite recipes for soups, stews, and stocks. These straightforward formulas, drawn from a globe-spanning repertoire, will please cooks of all kinds, from beginners to the accomplished.

Organized by ingredients such as vegetables, beans, grains, and fruit, the recipes include old favorites like French Onion and Chicken Matzoh Ball soups, as well as less familiar brews such as Jamaican Pumpkin soup, Shrimp and Scallop Seviche, and Poblano Corn Chowder. In addition to a chapter devoted to chilis--Braised Pork Chili with Black Beans and Corn is a particular winner--the authors provide notes on ingredients and techniques, historical asides, and a series of tongue-in-cheek sidebars, offering, for example, the Periodic Table of Soups and Baby Names for the New Millennium ("Art E. Choke" is one).

If these digressions aren't always apt, there are always the soups, with several pièce de résistance examples--Peking Duck; Lamb, Artichoke, and Rosemary Stew; and Saffron Mussel soup--guaranteed to please. A final section on stocks provides basic soup building-block information, and Things to Do with Leftover Soups offers next-day options, should any of the delicious bowls not be devoured instantly. --Arthur Boehm

Leslie Kaul attended the celebrated French Culinary Institute in Manhattan and, upon graduation, entered the fiercely competitive world of top-flight New York restaurants. After working her way through the ranks at Union Square Café, she went on to assume the prestigious saucier position at Lespinasse, eventually leaving to become a sous-chef at Gramercy Tavern. As Kaul's reputation grew, she came to the attention of Bob Spiegel and, in the fall of 1996, was enlisted as chef for Bob's new venture, Daily Soup.
Carla Ruben has been involved in the food business for over ten years. She and Bob own one of New York's premier catering companies, Creative Edge Parties Caterers, Inc. With the experience of serving thousands of people came the concept and expertise needed to launch Daily Soup. Ruben resides in New York with her husband, Georgios Avramopoulos.
Peter Siegel is an enigma.
Bob Spiegel was born in Trenton, New Jersey, and is CEO of Daily Soup. He graduated from Johnson and Wales College in 1982. He went on to become the sous-chef of New York's Glorious Food and co-founded Creative Edge Parties with Carla Ruben. In 1986, he was asked to teach American cuisine to chefs from the top hotel restaurants in India in exchange for their culinary secrets. He has also cooked extensively in the Emilia Romana and Tuscany regions of Italy, mainland China, and Hong Kong.
Robin Vitetta-Miller is a food writer and nutritionist whose other books include Jane Fonda Cooking for Healthy Living and The Newlywed Cookbook. She is a contributing editor for Cooking Light and has frequent food and nutrition features in Shape, Health, Natural Health, and Men's Fitness. She makes regular guest appearances on local, network, and cable television, providing nutrition information and conducting cooking demonstrations. Robin and her husband, Darrin, reside in Princeton, New Jersey.