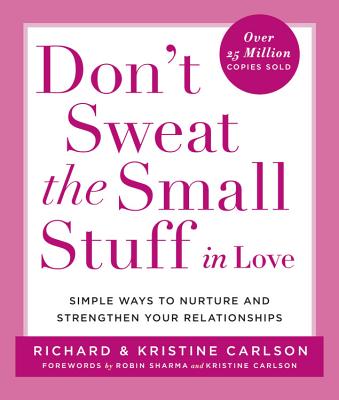 Simple Ways to Nurture and Strengthen Your Relationships

Form, maintain, and repair meaningful romantic relationships and feel like newlyweds every day with this simple, stress-free approach to love.

He's helped 12 million people reduce the stress at home and at work with the #1 New York Times bestselling author of Don't Sweat the Small Stuff. With this companion book, Richard Carlson partnered with Kristine, his wife of fourteen years, to create an easy, stress-free way to enhance personal relationships.

While depression, heartache, and anger are associated with love relationships, stress is rarely identified as a problem. Yet stress is often a factor in failing relationships. In these one hundred brief, beautifully written essays, the authors show readers how not to overreact to a loved one's criticism, how to appreciate your spouse in new ways, how to get past old angers, and many other ways to improve and increase the joy and pleasure that can and should be part of any relationship.

Richard and Kristine Carlson illustrate key strategies for creating a lasting connection, including:

Praise For Don't Sweat the Small Stuff in Love: Simple Ways to Nurture and Strengthen Your Relationships…

"Over a decade of positive psychology research seems to validate what we learned twenty years ago from Don't Sweat the Small Stuff. . . . These wonderful books help break down and simplify how to achieve that happiness."
—ShawnAchor, bestselling author of The Happiness Advantage