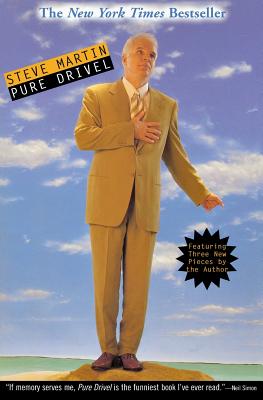 Steve Martin's talent has always defied definition: a seasoned actor, a razor-sharp screenwriter, an acclaimed playwright, and, of course, the ingenious comedian who turned King Tut into a national craze. In this widely praised collection of humourous riffs, Martin shows he is also a master of the written word. From a wildly imaginative meditation on who Lolita would be at age fifty to a send-up of the warning labels on medicine bottles, these pieces, many of which first appeared in The New Yorker, hilariously and intelligently skewer the topic at hand. Pure Drivel will have readers crying with laughter--and marveling that in addition to all of his many talents, Steve Martin is also a superb writer.

Steve Martin is a celebrated writer, actor, and performer. His film credits include Father of the Bride, Parenthood and The Spanish Prisoner, as well as Roxanne, L.A. Story, and Bowfinger, for which he also wrote the screenplays. He's won Emmys for his television writing and two Grammys for comedy albums. In addition to a play, Picasso at the Lapin Agile, he has written a bestselling collection of comic pieces, Pure Drivel, and a bestselling novella, Shopgirl. His work appears frequently in The New Yorker and The New York Times. He lives in New York and Los Angeles.

"Like the fuzzy little puff of marabou on the instep of a coquette's satin bedroom slipper . . . Martin's book of diminutive, often hilarious essays [is] . . . effortless and silly even as it's subtly erudite."—Salon

"Martin is a gorgeous writer capable of being at once melancholy and tart, achingly innocent and astonishingly ironic. He is a master at revealing the surreal poetry in pure drivel."—Elle
or support indie stores by buying on
Copyright © 2020 American Booksellers Association