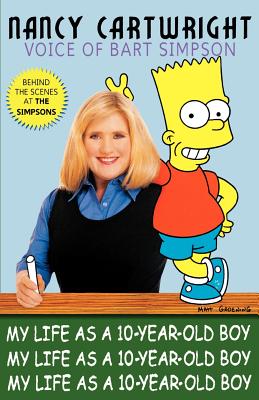 Ay carumba! the voice behind Bart Simpson reveals the real story of America's funniest family. Nancy Cartwright is the ultimate Simpsons insider. Her raspy, childlike voice is immediately recognizable as none other than Bart Simpson, the most precocious, irreverent, and intriguing ten-year-old ever to enter the American consciousness. In this behind-the-scenes story Nancy Cartwright tells of the Simpsons' early days, when the cast was given a closet-sized space to record commercial bumpers for The Tracey Ullman Show. She traces the Simpsons' rapid rise to wild popularity; offers hilarious anecdotes about cast members and guest stars, including Mel Gibson, Meryl Streep, and Elizabeth Taylor; and explains what goes into making the half-hour animated series. And she reveals what it's like to be at the center of an American institution, one that reinvented the sitcom, rocked the networks to the core, and changed forever the face of American television. Packed with more information than has ever been revealed about the longest-running animated show, here is the perfect book for the millions of Simpsons fans who can't get enough of America's favorite dysfunctional family.

Nancy Cartwright is familiar to millions around the world as the voice of Bart Simpson, a role she's been performing since 1987. She lives in the Los Angeles area.
or support indie stores by buying on