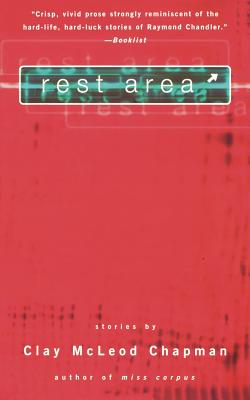 This edgy, darkly humorous short story collection will take hold of your imagination and won't let go. Sharply tuned, haunting, and darkly humorous, these stories take readers from the country fair to the suburban home to the boy scout camping trip, flipping each stopping point on its head. Every story begins and ends with one voice, and each contains a mystery or turn of events that shocks, entertains, and frightens--and often all three. In the title story, rest area, a father chats with other drivers while he waits for his daughter at a rest stop. She went to the bathroom, and he's been waiting for her ever since, and now he's handing out her picture. Have you seen her? Are you sure you haven't seen her? A remarkable combination of unexpected tenderness, deep sensitivity, and a fascination with the darker side of domesticity, these tales of ordinary people caught up in extraordinary situations will echo in your head long after you close the pages. Entering into its sixth year, Clay Chapman's Pumpkin Pie Show has established itself as an all-points artistic hodgepodge of music, theatre, and literature. It is a rigorous story-telling session backed with its own live soundtrack, built upon the same structure as a rock band, complete with musicians and vocalists. Each show consists of four 15 minute short stories, which can either be read or performed on stage.

Clay McLeod Chapman is the author of the short story collection rest area. Creator of the "Pumpkin Pie Show," he has performed his writing throughout the United States and at Fringe Festivals around the world. Born in Richmond, Virginia, he now lives in Brooklyn, New York.
Loading...
or support indie stores by buying on