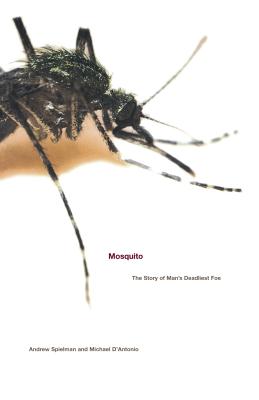 The Story of Man's Deadliest Foe

Now in paperback--a fascinating work of popular science from a world-renowned expert on mosquitoes and a prize-winning reporter.

In this lively and comprehensive portrait of the mosquito, its role in history, and its threat to mankind, Spielman and D'Antonio take a mosquito's-eye view of nature and man. They show us how mosquitoes breed, live, mate, and die, and introduce us to their enemies, both natural and man-made. The authors present tragic and often grotesque examples of how the mosquito has insinuated itself into human history, from the malaria that devastated invaders of ancient Rome to the current widespread West Nile fever panic. Filled with little-known facts and remarkable anecdotes that bring this tiny being into larger focus, Mosquito offers fascinating, alarming, and convincing evidence that the sooner we get to know this pesky insect, the better off we'll be.

Andrew Spielman, Sc.D., is one of the world's foremost authorities on mosquitoes and the infections that they transmit. He is Harvard University's senior investigator in tropical diesase. His several hundred scientific publications on the subject deal with malaria, encephalitis, filariasis, dengue, and various tick-borne pathogens. Professor Spielman is the current director of the Center for International Development's new effort to develop a global antimalarial strategy. Michael D'Antonio shared the Pulitzer Prize in journalism as part of a Newsday reporting team. He has written five acclaimed non-fiction books, including Atomic Harvest and Tin Cup Dreams. He lives on Long Island.
or support indie stores by buying on
Copyright © 2020 American Booksellers Association