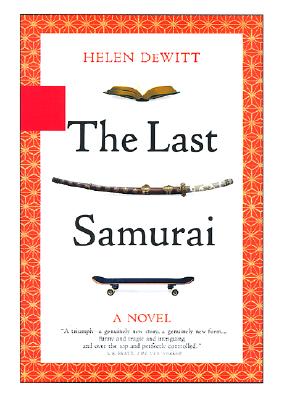 Helen DeWitt's extraordinary debut, The Last Samurai, centers on the relationship between Sibylla, a single mother of precocious and rigorous intelligence, and her son, who, owing to his mother's singular attitude to education, develops into a prodigy of learning. Ludo reads Homer in the original Greek at 4 before moving on to Hebrew, Japanese, Old Norse, and Inuit; studying advanced mathematical techniques (Fourier analysis and Laplace transformations); and, as the title hints, endlessly watching and analyzing Akira Kurosawa's masterpiece, The Seven Samurai. But the one question that eludes an answer is that of the name of his father: Sibylla believes the film obliquely provides the male role models that Ludo's genetic father cannot, and refuses to be drawn on the question of paternal identity. The child thinks differently, however, and eventually sets out on a search, one that leads him beyond the certainties of acquired knowledge into the complex and messy world of adults.

The novel draws on themes topical and perennial--the hothousing of children, the familiar literary trope of the quest for the (absent) father--and as such, divides itself into two halves: the first describes Ludo's education, the second follows him in his search for his father and father figures. The first stresses a sacred, Apollonian pursuit of logic, precise (if wayward) erudition, and the erratic and endlessly fascinating architecture of languages, while the second moves this knowledge into the world of emotion, human ambitions, and their attendant frustrations and failures.

The Last Samurai is about the pleasure of ideas, the rich varieties of human thought, the possibilities that life offers us, and, ultimately, the balance between the structures we make of the world and the chaos that it proffers in return. Stylistically, the novel mirrors this ambivalence: DeWitt's remarkable prose follows the shifts and breaks of human consciousness and memory, capturing the intrusions of unspoken thought that punctuate conversation while providing tantalizing disquisitions on, for example, Japanese grammar or the physics of aerodynamics. It is remarkable, profound, and often very funny. Arigato DeWitt-sensei. --Burhan Tufail

Helen DeWitt was born in Takoma Park, Maryland. She grew up mainly in South America, started her degree at Smith College in 1975 and dropped out twice. She did a B.A. at Lady Margaret Hall and a doctorate at Brasenose, then spent a year as junior research fellow at Somerville before deciding

to give up academic life in 1989. She now lives in Maryland.
or
Not Currently Available for Direct Purchase
Copyright © 2020 American Booksellers Association