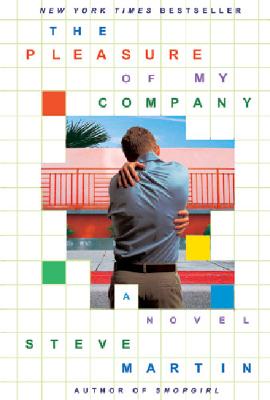 The Pleasure of My Company (Paperback)

Steve Martin's "gifts for subtlety and slyness compare to those of the finest comic novelists" (People) and his latest New York Times bestseller--a witty and tender tour de force--is now in paperback! Shopgirl revealed the novelist in Steve Martin--witty, tender, intelligent, and passionate about his craft. And with the successful publication of The Pleasure of My Company, his reputation as one of our most gifted writers has been confirmed. Here, the reader is introduced to Daniel Pecan Cambridge, whose life is full and rich--but only within the confines of his Santa Monica apartment. Daniel's pathological obsession with street curbs and gas station attendants wearing blue hats may prevent him from venturing into the world outside of his window, but not from pursuing romance in his own peculiar way. Meticulously constructed, laugh-out-loud funny, and brilliantly inventive, Steve Martin's chronicle of a modern-day neurotic yearning to break free has touched more than 200,000 readers. Now in paperback, thousands more can have the pleasure of discovering his most delightful novel to date.