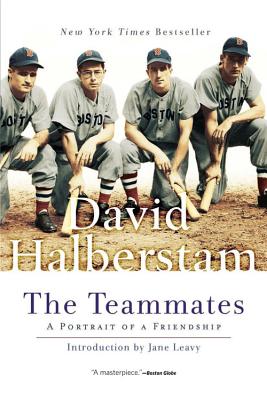 A Portrait of a Friendship

More than 6 years after his death David Halberstam remains one of this country's most respected journalists and revered authorities on American life and history in the years since WWII. A Pulitzer Prize-winner for his ground-breaking reporting on the Vietnam War, Halberstam wrote more than 20 books, almost all of them bestsellers. His work has stood the test of time and has become the standard by which all journalists measure themselves.

The Teammates is the profoundly moving story of four great baseball players who have made the passage from sports icons--when they were young and seemingly indestructible--to men dealing with the vulnerabilities of growing older. At the core of the book is the friendship of these four very different men--Boston Red Sox teammates Bobby Doerr, Dominic DiMaggio, Johnny Pesky, and Ted Williams--who remained close for more than sixty years.

The book starts out in early October 2001, when Dominic DiMaggio and Johnny Pesky begin a 1,300-mile trip by car to visit their beloved friend Ted Williams, whom they know is dying. Bobby Doerr, the fourth member of this close group--"my guys," Williams used to call them--is unable to join them.This is a book--filled with historical details and first-hand accounts--about baseball and about something more: the richness of friendship.

The Best and the Brightest (1962), his sixth book, a critique of the Kennedy administration's Vietnam policy, became a #1 bestseller. His next book, The Powers that Be, a study of four American media companies, was hailed by the New York Times as a "prodigy of research." Many of Halberstam's books explored themes in professional sports, including bestsellers The Teammates, a portrait of the friendship between baseball players Ted Williams, Dominic DiMaggio, Johnny Pesky, and Bobby Doerr, and The Education of a Coach, a profile of New England Patriots' Coach Bill Belichick.
Loading...
or support indie stores by buying on