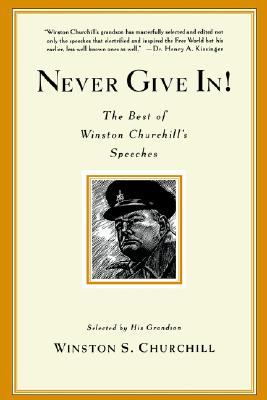 Never Give In! (Paperback)

The Best of Winston Churchill's Speeches

Winston Churchill was the most eloquent and expressive statesman of his time. It was as an orator that Churchill became most completely alive, and it was through his oratory that his words made their greatest and most enduring impact. While the definitive collection of Churchill's speeches fills eight volumes, here for the first time, his grandson, Winston S. Churchill, has put together a personal selection of his favorite speeches in a single, indispensable volume. He has chosen from his grandfather's entire output and thoughtfully introduces each selection. The book covers the whole of Churchill's life, from the very first speech he made to those of his last days. It includes some of Churchill's best-known speeches as well as some that have never before been published in popular form. Today, Sir Winston Churchill is revered as an indomitable figure and his wisdom is called upon again and again. Reading these speeches, from the perspective of a new century, we can once again see Sir Winston Churchill's genius and be moved and inspired by his words.

The editor, Winston S. Churchill, grandson of the former British Prime Minister Sir Winston Churchill, is an author, journalist and former war correspondent who served in the House of Commons as a Member of the British Parliament from 1970 to 1997. His home is in England.
or support indie stores by buying on
(This book is on backorder)
Copyright © 2020 American Booksellers Association