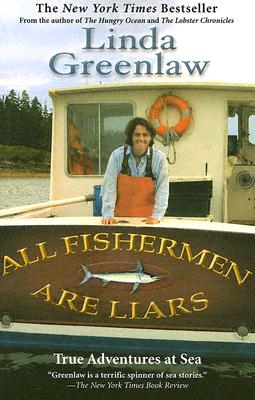 All Fishermen Are Liars

Just before Christmas, Linda meets up with her best friend and fellow fisherman Alden Leeman for lunch and a drink at the Dry Dock, a well-worn watering hole in Portland, Maine. Alden, the captain of Linda's first fishing expedition, has seen his share of mishaps and adventures at sea. When Linda shares memories of navigating her ship through one of the craziest storms she's ever seen, Alden quickly follows up with his own tales. Then other fishermen, who are sitting on the periphery attentively listening, decide to weigh in with yarns of their own.All Fishermen Are Liars brims with true stories of the most eccentric crew member, the funniest episode, the biggest fish, and the wildest night at sea. Denizens of the Dry Dock drift in and out as the bar begins to swell with rounds of drinks and tales that increase in drama. Here are some of the greatest fishing stories ever--all relayed by Linda Greenlaw in her inimitable style.All Fishermen Are Liars will give readers what they have come to love and expect from Linda Greenlaw--luminous descriptions and edge-of-the-seat thrills. It's the perfect book for anyone who loves fishing and the sea.