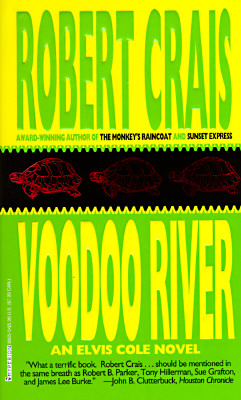 Elvis Cole finds himself deep in the bayou of Louisiana searching for the estranged parents of a television star -- but something deadly is looking for him.

L.A. private eye Elvis Cole is hired by popular television star Jodie Taylor to delve into her past and identify the biological parents who gave her up for adoption thirty-six years before. Cole's assignment is to find out their biological history and report back.

It seems all too clear cut. But when he gets to Louisiana and begins his search, he finds that there's something much darker going on. Other people are also looking for Taylor's parents, and some are ending up dead.

And when Cole realizes that his employer knew more than she was telling, Voodoo River becomes a twisting tale of identity, secrets, and murder.

Robert Crais lives in Los Angeles and is the author of many New York Times bestsellers, including The First Rule, The Sentry, the #1 bestseller Taken, and Suspect. In 2014 the Mystery Writers of America honored Robert Crais with the Grand Master Award.
Loading...
or support indie stores by buying on