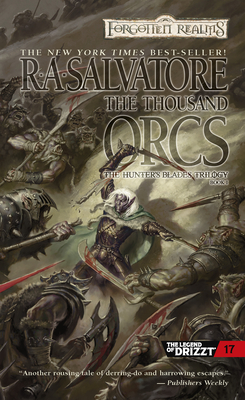 When Obould Many-Arrows and the united orc tribes band together with Gerti Orelsdottr and her frost giants, no one is safe. After a skirmish with the orcs almost ends in tragedy, Drizzt Do’Urden and the Companions join with Dagnabbit and a group of dwarves to warn nearby towns of the impending hordes.

But the fight inexorably comes to them at the Battle of Shallows, where humans and dwarves must unite to defend the settlement against the rampaging orcs and their allies. As blades slash and feet trample, even the heroes may not survive a desperate stand.

The Thousand Orcs is the first book in The Hunter’s Blades trilogy and the seventeenth installment in the Legend of Drizzt series.