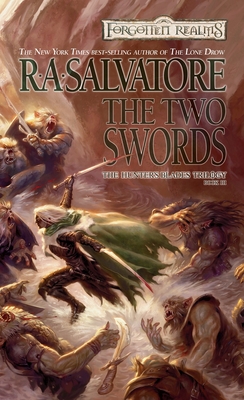 Dark elf Drizzt Do'Urden would like nothing more than to kill King Obould Many-Arrows, the leader of the slavering orc army that slaughtered his closest friends. Now, it seems even Innovindil, Drizzt’s new moon elf companion, cannot escape the grip of Obould’s murderous scourge. When the orc king steals Innovindil’s beloved pegasus, Drizzt must accompany her on a rescue mission to the northern lands of the frost giants—even if it means suffering the same fate as the Companions.

Except the Companions are not dead . . . yet. Unbeknownst to Drizzt, they are sealed inside the walls of Mithral Hall, awaiting a battle that will either make or break them. As Obould's horde prepares for a siege just outside the gates, Bruenor must mastermind a plan that will defeat the orcs and lead his clan to victory.

The Two Swords is the third book in The Hunter’s Blades trilogy and the nineteenth installment in the Legend of Drizzt series.