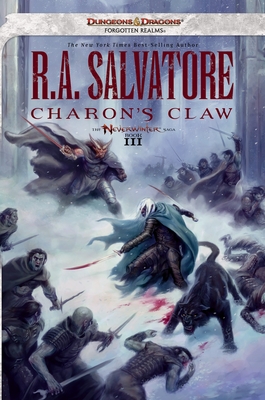 In this third installment of the New York Times–bestselling Neverwinter Saga, Drizzt draws his sword once more for the sake of his friends

Drizzt and Dahlia Sin’felle have defeated the sorceress Sylora Salm, but Dahlia’s thirst for revenge is far from slaked. Now, she speaks of nothing but the moment she will face the evil Netherese lord Herzgo Alegni—a moment she has been waiting for since she was just a child. Though Drizzt and Dahlia’s bond is no longer just one of friendship, there is much he does not know about his new lover. What is the driving force behind the darkness he’s seen within her? Can he justify another battle to settle a grudge he does not understand?

But Dahlia isn’t the only one seeking vengeance against Alegni. Artemis Entreri, Drizzt’s former enemy, offers to aid Dahlia in her mission, hoping it will win him his freedom. But partnering with Entreri poses new challenges: Charon’s Claw, Algeni’s sentient sword, dominates Entreri’s movements—if not his mind. And then there’s the way Entreri looks at Dahlia, causing Drizzt to wonder if the cunning assassin is still more foe than friend.

Charon's Claw is the third book in the Neverwinter Saga and the twenty-fifth installment in the Legend of Drizzt series.