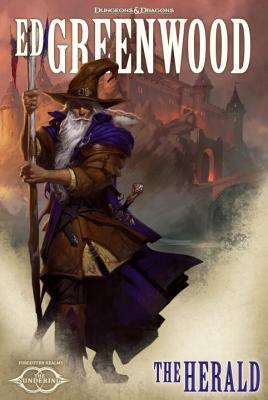 In the 6th and final book of the multi-author Sundering series launched by New York Times best-selling author R.A. Salvatore, Ed Greenwood, the creator of the Forgotten Realms(R), further chronicles the exploits of Elminster as he fights for the future of Faerun.
Chaos grips Faerun as vainglory, prophecy, and ancient forces comingle in the shadows cast by war. Agents of the Shadovar lurk in the corners of Candlekeep in search of the arcane secrets that will power their war machine toward Myth Drannor. Gods and their Chosen run amok, all in a gambit to seize power. And a threat foretold by an ancient seer stirs.
At the heart of it all, Mystra, the great Goddess of Magic, has withdrawn from the world. Without her protection, Elminster, her greatest champion, fears for the nascent Weave, the fabric of magic Mystra wields to bind Faerun. Will the Nightseer Shar, mistress of the great and fearsome Shadovar, seize the opportunity to blanket the world with her Shadow Weave?
With the help of Storm Silverhand and his protege Amarune, Elminster works frantically to strengthen the Weave's tethers and forestall what seems an inevitable reckoning. But other interests machinate for their own sinister ends.
As the Sundering draws nigh, Elminster and his heroic cohort must see the signs for what they are. The choice of worlds lies in the balance.

ED GREENWOOD is the creator of the Forgotten Realms(R) fantasy world setting and the author of more than 170 books that have sold millions of copies worldwide in over two dozen languages. In real life, he's a Canadian librarian who lives in the Ontario countryside with his wife, a cat, and far too many books.
Loading...
or
Not Currently Available for Direct Purchase