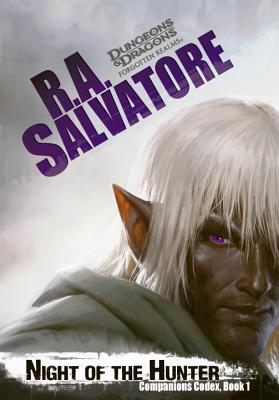 Night of the Hunter

R.A. Salvatore's New York Times best-selling saga continues as dark elf Drizzt Do'Urden returns to Gauntlgrym with old friends by his side once again, as they seek to rescue Bruenor's loyal shield dwarf-turned-vampire. But not only do Drizzt and his allies face a perilous journey through the Underdark and the dangers of the undead that lie within, but they must cross through a colony of drow, who would like nothing better than to see Drizzt Do'Urden dead.

R.A. Salvatore is the New York Times best-selling author of more than forty novels, including the popular Forgotten Realms series The Legend of Drizzt. He's an avid gamer, father of three, and loyal citizen of Red Sox Nation.
Loading...
or
Not Currently Available for Direct Purchase