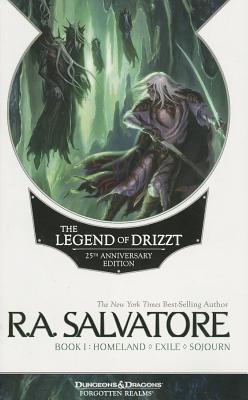 The Legend of Drizzt 25th Anniversary Edition, Book I

The Legend of Drizzt® 25th Anniversary Edition, Book I collects the first three novels in this best-selling series: Homeland, Exile, and Sojourn in a new trade paperback edition. A great value for anyone who’s ready to experience the Legend of Drizzt.

Drizzt Do’Urden made his first mistake the moment he was born: he was a boy. In the rigid matriarchy of the dark elf city of Menzoberranzan, that makes his life forfeit. But when his own mother tries but fails to kill him, Drizzt's path is set. He must find a way to escape the treacherous Underdark, even if that means setting out alone into the no less dangerous World Above.

R.A. Salvatore is the New York Times best-selling author of more than forty novels, including the popular Forgotten Realms series The Legend of Drizzt. He's an avid gamer, father of three, and loyal citizen of Red Sox Nation. Residence: Massachusetts
Loading...
or support indie stores by buying on
(This book is on backorder)