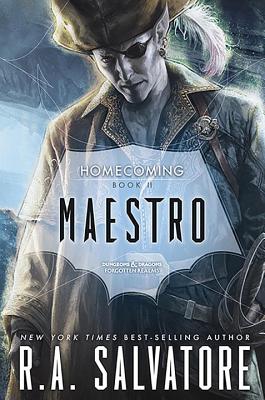 Something terrible, unspeakable, immense, has come to Menzoberranzan and is leaving death and destruction in its wake. The primordial of Gauntlgrym stirs, sending Cattie-brie and Gromph to Luskan, and the ruins of the only power that can keep the beast in check. The damage of the Darkening, of war, and of a demon-ravaged Underdark has sent cracks out across the North. Some of this damage may never be repaired.

And Drizzt is going home. But not to Mithral Hall. Not to Icewind Dale. He’s going to Menzoberranzan. Bruenor is ready to march with him bringing along an army of dwarves to end the scourge of Menzoberranzan, but Drizzt needs to see what’s happening there. The dwarf army may not be necessary. The City of Spiders might already have fallen to the demons and their wicked prince. But even if that’s true, what’s to say the demons will stop there?

Maestro picks up where Archmage left off, plunging Drizzt into his most dangerous adventure yet, and with all the action, adventure, beloved characters, dark elves, monsters, and demon princes Drizzt fans adore.

R.A. Salvatore is the New York Times best-selling author of more than forty novels, including the popular Forgotten Realms series The Legend of Drizzt. He’s an avid gamer, father of three, and loyal citizen of Red Sox Nation.
Loading...
or
Not Currently Available for Direct Purchase