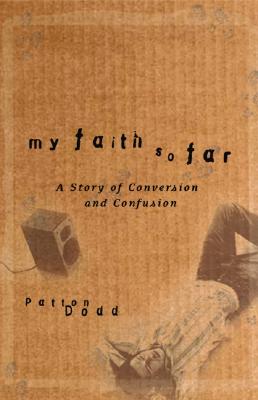 My Faith So Far (Hardcover)

A Story of Conversion and Confusion

In this frank, funny, and often challenging memoir about life in and out of the church, twenty-something Patton Dodd reveals his quest for an authentic experience of God. On his journey he attempts to pinpoint and justify his belief in God, first with the fervent absolutes that characterize a new believer's faith but then with a growing awareness of the cultural complexities that define his faith and encompass his understanding of Christianity.

When a spiritual awakening in his last year of high school wrenches Dodd out of his rebellious party days, he embarks on a quest for God. He exchanges pot smoking for worship dancing, gives up MTV for Christian pop, and enrolls at a Christian university. Soon, however, he finds himself ill at ease with the other Christians around him and with the cloying superficiality of the Christian subculture. Dodd tells his story in contradictory terms--conversion and confusion, acceptance and rejection, spiritual highs and psychological lows. With painstaking honesty, he tries to negotiate a relationship with his faith apart from the cultural trappings that often clothe it.

Dodd's moving story paints a nuanced and multilayered portrait of an earnest quest for God: the hunger for genuine faith, the bleak encounters with doubt, and the consuming questions that challenge the intellect and the soul. This is a story that will resonate with the emerging generation of young adults attempting to break new ground within their own faith tradition.

Patton Dodd has worked as a ghost writer, editor, movie reviewer, and submissions director for a film festival. He has written for both religious and general audiences in publications such as re: generation quarterly, the Colorado Springs Independent, and Life@Work, as well as numerous webzines, including Killing the Buddha, The New Pantagruel, and The Revealer. He is a doctoral candidate in religion and literature at Boston University.
or
Not Currently Available for Direct Purchase
Copyright © 2020 American Booksellers Association